Posted on February 29, 2012 by stlouisisapoem 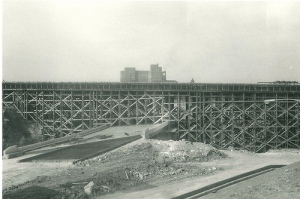 Chris Naffziger at St. Louis Patina has a post today entitled “The Death of Central St. Louis.” It’s well worth reading; it looks at the stretch of the City of St. Louis between Interstates 64/40 and 44between Lafayette Square and Kingshighway. What few knew when they were built, we all know now: highways form barriers; highways divide.

In 2010, Tim Lee at Bottom-up had a similar post, “Freeways and the Decline of St. Louis.” It’s worth reading, too. (Note that the older posts are archived but Lee’s blog has moved to Forbes and is now called “Disruptive Economics.”)

It’s progress, it is, and
not all progress is bad but
the  total cost is rarely calculated
in the configuration of concrete
and beams, pavement and bridges,
archways and signage and lamps
engineered and designed perfectly
but the other cost is there, nonetheless,
and usually identified long after, when
The Hill is split and Webster Groves
divided and neighborhoods
isolated and displaced so that schools
and factories and office buildings
become tombstones for what once was.
Once there was life in this moonscape.

Photograph: The construction of the connection of Interstates 44 and 55 in St. Louis. Photographer unknown.  Source: Preservation Research Office.

We live in this poem called St. Louis, a poem we're still writing. It's about history, and art, and politics, and business, buildings and streets, rich and poor, and food (of course), and all of the other things that make this city what it is and what it will become. We publish poems about St. Louis, and you're invited to contribute via the comments to posts (for now, until we get our communications organized). Send us a link or an email address, and we'll respond. Help us write the poem that is St. Louis.
View all posts by stlouisisapoem →
This entry was posted in Uncategorized and tagged Disruptive Economics, highways, Interstate 44, poetry, St. Louis Patina. Bookmark the permalink.